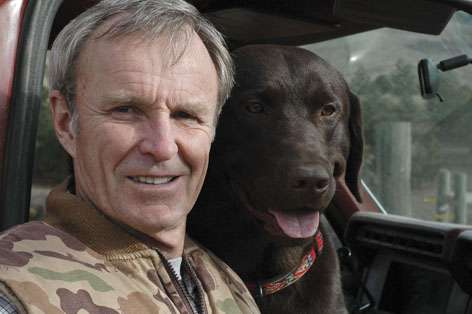 This American alpinist, born in 1948, lives in Spokane in the state of Washington. He was not well known in Europe to the point that the Magazine Mountain in the years that John started being mentioned, titled his portrait : « who is this man ? »

John Roskelley, at this time, was a curiosity of sorts. He accumulated difficult ascents at high altitude with an accelareted rhythm. 1976 proved to be the kingpin of the immense north west face of the Nanda Devi 7816m. The stories tell of his endurance, efficiency at altitude, and his huge character. In 1977, he succeeded in the first Grand Tour of Trango 6286m with Galen Rowell, Kim Schmitz and Dennis Hennek. The following year, after attempting the north face of Jann , roped in a pair, on K2 8611m, he was the firstthe first to climb the north esat ridge, a long route which remains rare. The Americans, under the direction of Jim Whittaker, didnt use oxygen, nor carriers at altitude.

In 1979, it was whilst doing a technical ascent that John was spoken about again : the first in Gaurishankar 7134m.

John continues his expeditions nearly every year, pinning especially the first on the south west faces of Cholaste 6440m, in 1982, with Vern Clevenger, Galen Rowell and Bill O'Connor, or the north east face of its neighbour Tawoche 6501m, in Februrary 1989 with Jeff Lowe. He made several attempts on the west ridge and n the North face of Everest, in Melungste, and even to Gaurishankar, where he had already been first.

Previous John had done a lot of rock climbing and carried out precise beautiful feats (in the 1970s) on the big Canadian waterfalls. He remains active, having carried out the famous Slipstream in 2009. Last year, he climbed Goats Beard, the longest waterfall in the USA.

Author of several books relating his expeditions, John Roskelley has turned towards politics. He is very active with his fellow citizens in Spokane. It is with a strong personality, a man of conviction, colourfully outspoken that the Piolets d'Or celebrates this year.