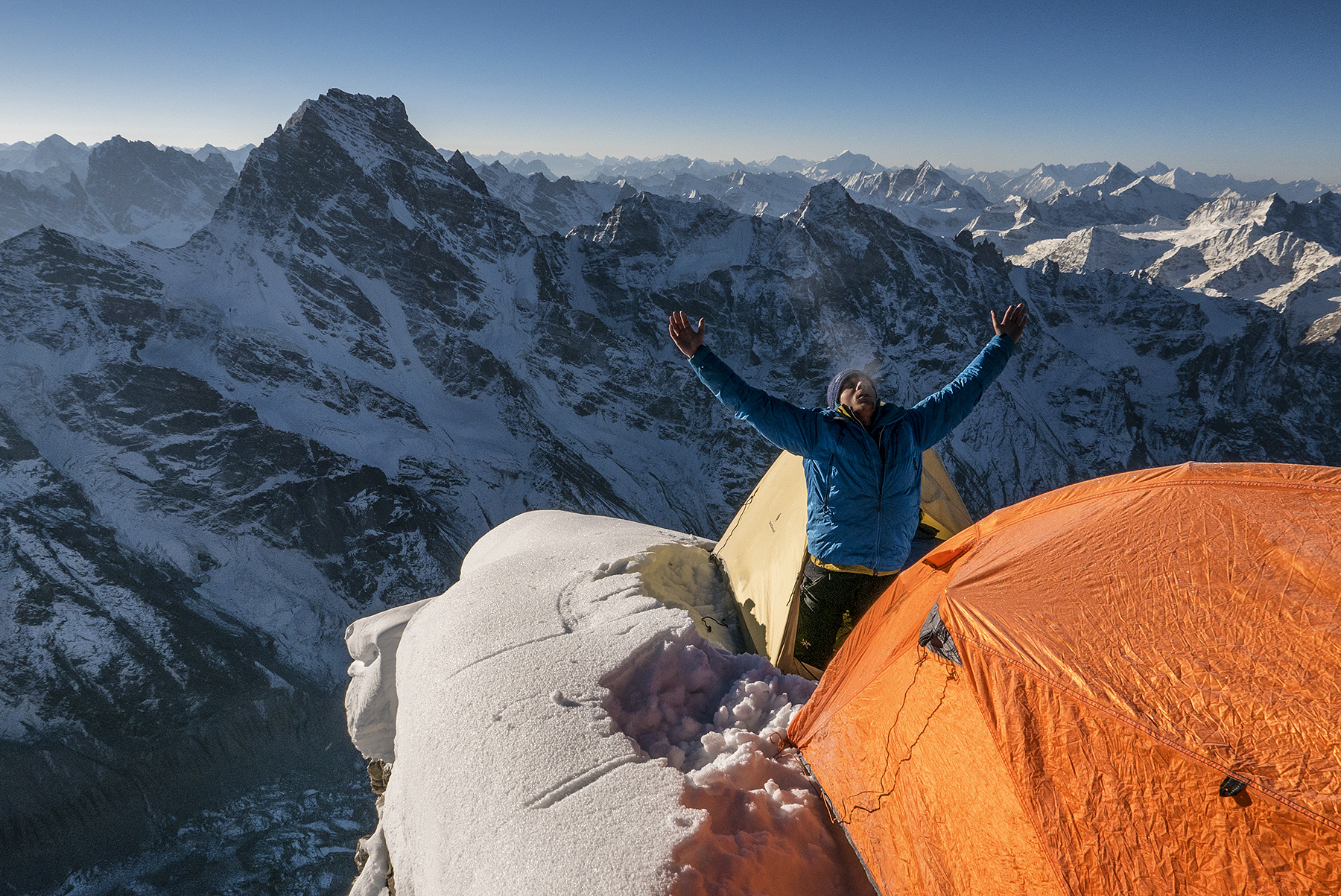 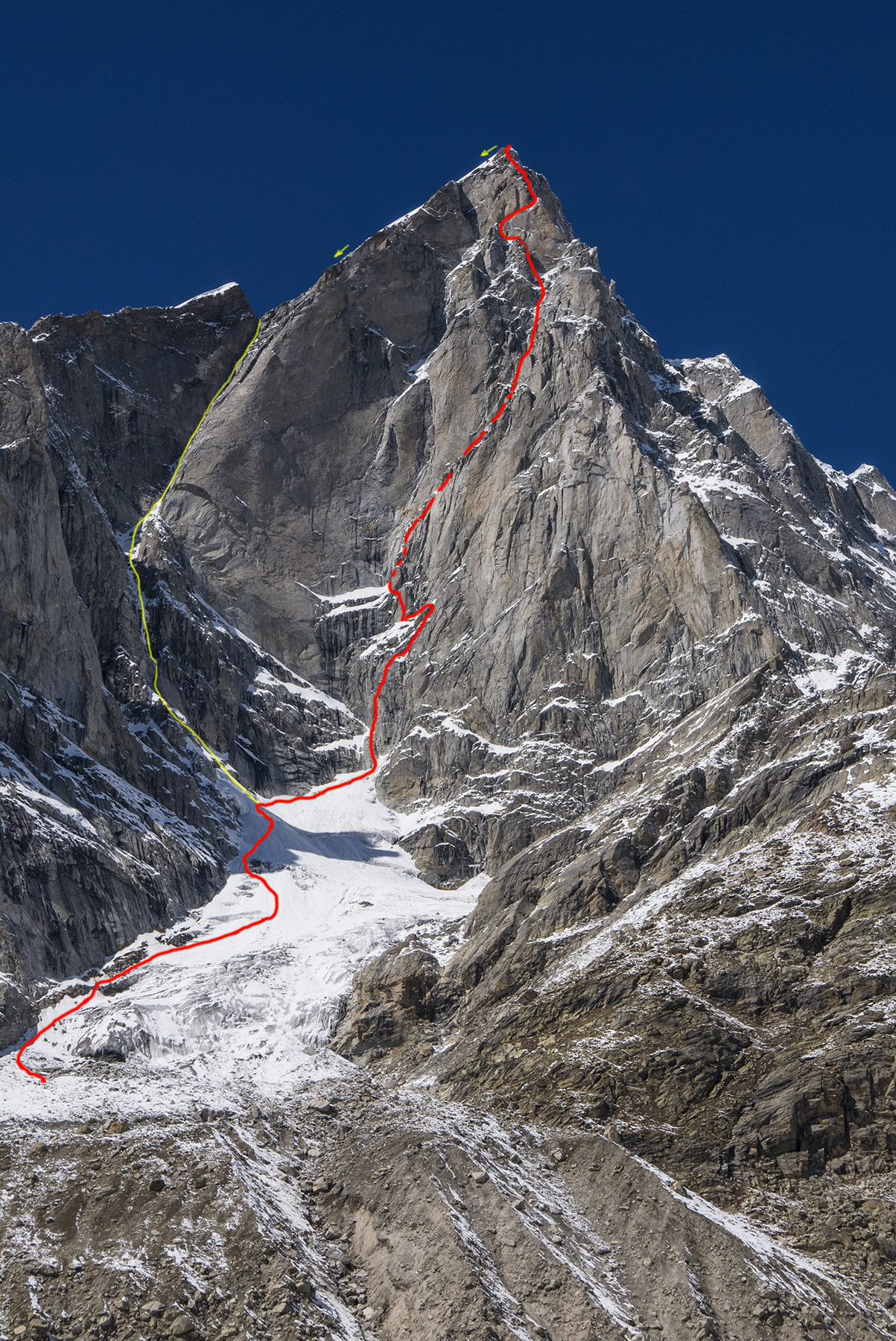 Following his ascent of Hagshu in 2014 (which received a Piolet d’Or in 2015), veteran Slovenian alpinist Marko Prezelj, who already has three Piolets d’Or to his name, set his sights on the unexplored east side of the nearby Cerro Kishtwar. Mick Fowler and Steve Sustad made the first ascent of the peak by the northwest face in 1993. After acclimatizing with a first ascent of the south ridge of Chomochior (6,278m, 1,400m, D+), the four-person team of Marko Prezelj, American Hayden Kennedy (who received a Piolet d’Or in 2013 for his ascent of Baintha Brakk in India), Frenchman Manu Pellissier, and Slovenian Urban Novak made the first ascent of Light Before Wisdom on 5-8 October 2015. The 1,200 m line is rated ED+ (more precisely: 5.11, WI6, M6, A2). The team descended by the south face and then rappelled the mountain’s east couloir. 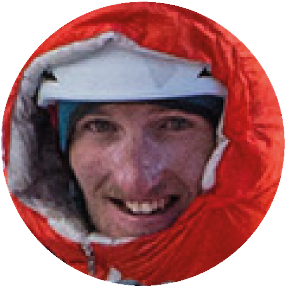 Hayden grew up in Carbondale, Colorado, and was taught to climb by his father, Michael Kennedy. When Hayden graduated from high school in 2009, he left home and began life on the road. He's not looked back since. He has climbed all over the USA, from free climbs on El Cap to muddy aid routes on the Fisher Towers. He has also spent three seasons climbing in Patagonia, and two full summers climbing in the Karakoram, where his successes include the first ascent of Hassin Peak, and the east face of K7 (both with Kyle Dempster).  Hayden won a Piolet d’Or in 2013 for his ascent of Baintha Brakk (Ogre 1) by the southeast ridge and the south face with Kyle Dempster. When he is not climbing, he works as a writer, rigger, house painter and Christmas-light hanger. 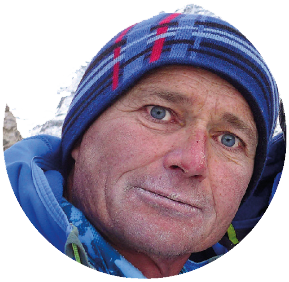 Marko Prezelj was born in 1965. Trained as a chemical engineer, he works as a professional mountain guide, photographer, and as a mentor for a group of young Slovenian alpinists. He enjoys situations that require him to be focused and spontaneous. He says: “Uncertainty is the essence that feeds my curiosity, leading me through life as a son, father, husband, alpinist, mountain guide, photographer, friend, and in most cases, just simply a human. The simple life is my ultimate challenge”. 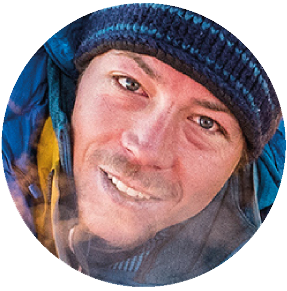 “I was born in Ljubljana on 10 January 1986. I am a member of the Kamnik alpine club. Over the past 12 years I have had the chance to experience many magical moments in the mountains. I would say that the most important outcome of these experiences is the friendships and partnerships that I have been able to form. Some highlights include new routes on Pharilapcha (Nepal), Hidden Sud, and K7 (Pakistan). In the case of the latter ascent, we actually learned more from our failure than from our success! When I’m not climbing, I am working on finishing my PhD studies at Slovenia’s National institute of Chemistry and helping my dad on our small family farm”. 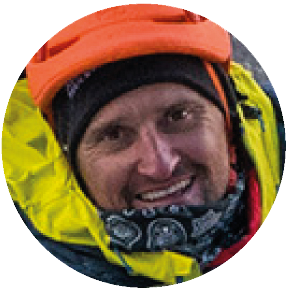 As a mountain guide and member of France’s elite mountain military group, the Groupe Militaire de Haute Montagne (GMHM) from 2001 to 2010, the 40-year old alpinist has hauled his climbing kit to the mountains of every continent. From his first expedition to the south face of Aconcagua in 1994, to his repeat ascent of Spantik’s legendary Golden Pillar in 2000 with Marko Prezlj, Emmanuel Guy, and the late Attila Ozsvath, Manu has established, climbed, and attempted routes all over the world. His notable attempts include the north ridge of Rakaposhi and the north face of Jannu. He has made first ascents in Alaska, Iran, Patagonia, and Albania. Manu applies this spirit of exploration to his own home mountains, and recently established a new mixed route in Lauzière. Manu is a sports educator at a residential children’s centre (Association Gai Logis) and the father of three children.